Rescuing Data from a “Click Of Death” Harddisk: Unexpected Success!

Lately I got a 2,5” harddisk in my hands which produced the famous “click of death”. In this scenario there is no simple way to retrieve data as there is either an electronic or physical problem which has to be repaired. Data on this harddisk was not too important, for that reason sending it to an expensive data rescue company (something like > € 500.-, often without guarantee that it will work) was not an option. However, retrieving some data from it would have been nice, so we decided to try to fix it by ourselves. I have to state that we do not have much experience in repairing broken harddisks and moreove lack the required tools:

All in all my guess was that the chance of actually retrieving data from this disk was at approx. 30% or less – but hey, why not give it a try?

As a first step we decided to order the very same harddisk (2.5” Seagate Momentum 5400.4 with 250GB) from eBay. Fortunately we managed to purchase one right away for € 20.-, a price which was worth the risk. We received it about 4 days later and – although the disk was packaged very badly, it was functional. Below you see the functional drive on the left and the defective one on the right. 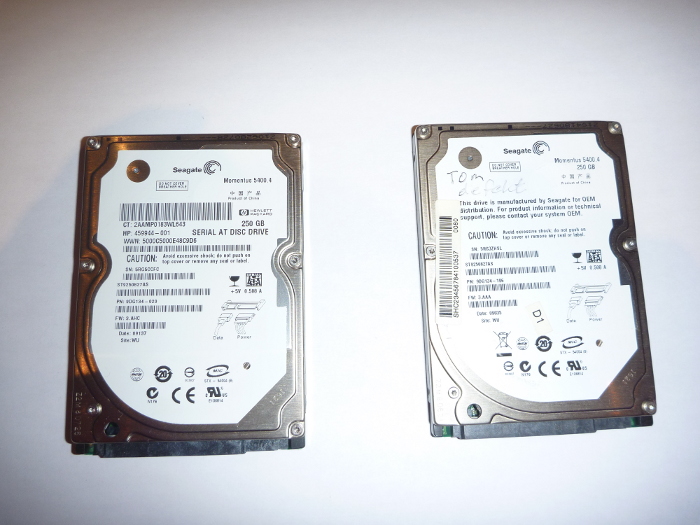 Although the model and the product key were the same, the part number and firmware revision was different as you can see in the following pictures – hmmm, will that lead to problems? 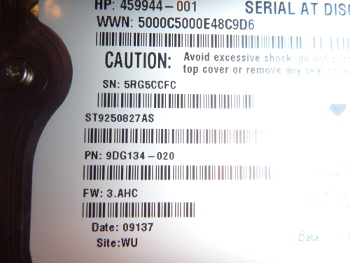 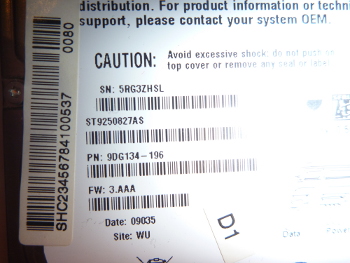 My first guess was that the problem was related to the electronics as the harddisk did not die slowly but stopped functioning instantly without damaging it physically in any way (overheating, dropping it etc.). In case of a physical problem I’d expect an increasing amount of bad blocks, however, that was not the case. For that reason my first try was to simply switch the electronics (the PCB board) from one disk to another which can be done without opening the disks. The following picture shows the electronics of the harddisk, which looked good except a discoloration in the lower left area – maybe due to heat issues? 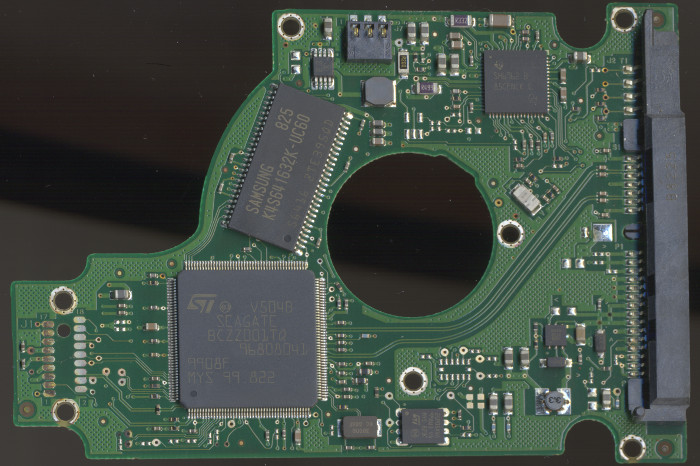 However, switching electronics failed: Both disks did not spin up. I don’t really know the reason why but my guess is that the firmware is written on the platters itself which has to fit to the PCB board in some way. This was unfortunate as I now could not think about a way to repair the drive without opening it – and opening it outside of a clean room is – as stated above – not a good idea.

Anyway – the next step was to open the disks. Below you can see the already opened disks spinning up.

The following video shows the the reason for the infamous clicking noise: The harddisk head repeatedly positions the head in order to find the appropriate sector on the platter.

The next video shows the spinup of the working harddisk, one can see that the head can be correctly positionened, the drive is then waiting for commands.

The idea was now to simply exchange the platters from one disk to the other. So the first step was to unscrew the spindle in order to remove the platters: 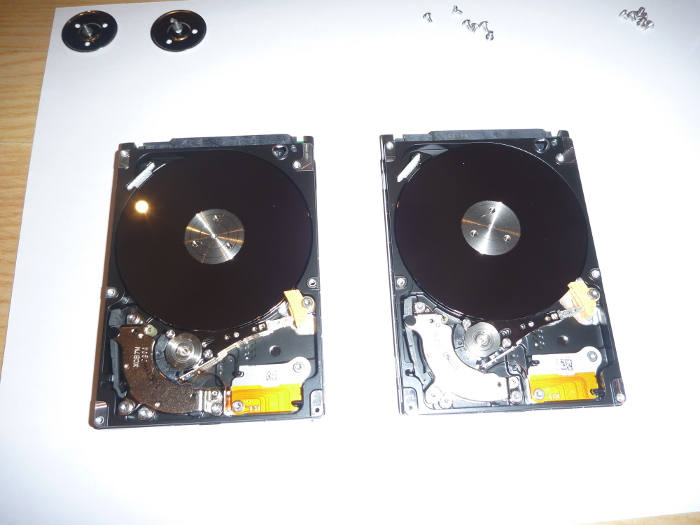 Unfortunately the drive had two platters, which made the platter exchange a bit complicated. After some time I managed to transfer the platters, although it did not work out that nicely as it was quite hard to get the harddisk heads back on the disk. Probably there were quite some “dont’s” involved in this procedure such as putting the harddisk heads on the platters in order to reassemble them.

Well, I put everything back together and tried to spin them up and – both disks failed. Hmmm. O.k. – this was logical to some degree due to the firmware issue – so I switched the electronic PCB, too. After that the disks with the platters from which I wanted to rescue the data did spin up to some degree but made strange clicking noises – different from the click of death – which did not sound too good. Interestingly, the other harddisk produced the same click of death although the platters itself were good. The conclusion of all that was that the harddisk heads seem to have been broken, so the read errors and the click of death did not result from a faulty media. Anyway, these clicking noises from the “repaired disk” did not sound very promising.

Right from the beginning I already asked myself if a misalignement of the platters (if they are rotated against each other in another angle when reassembling) would make any difference. Well, after those clicking noises I started to research a bit and the results were devastating as you can read in the following posts:

O.k., this did not look very promising, my impression was that the data was lost completely. In dispair, I tried to spin it up one more time and interestingly, the clicking noises went away after some time and the mount drive dialogue came up on my Linux desktop. Wow – did it actually work? I first tried to access the partition table via fdisk – and yes, I could read it! So I tried to mount it read-only and this worked, too, the filesystem (NTFS) was accessibly! So I carefully tried to retrieve some data and
– it actually worked!!!

In the end I was able to retrieve all necessary data from the disk (approx. 700MB)!
Mission accomplished with a € 20.- replacement disk, some basic tools and approx. 2 hours of work!

The retrieval was, however, quite slow and accompanied with strange clicking noises, moreover, read errors occured, which could be overcome by resetting the disk and retrying it. Retrieving the whole data from the disk would probably not have worked, however, the really valuable data is most often only a small percentage of the actually stored data on a disk.

My conclusion of the whole story was the following: