Since recently I have a Supermicro Node Server at our hands which we are planning to use for a hot-standby system. A vital point for replication and hot-standby is a reliable and fast network connection between the nodes. The Supermicro nodes implement an Infiniband Mellanox network adapter, which claims to provide transfer rates of up to 40GBits / second. This networking standard seems to have the following advantages:

As Infiniband is not that common I decided to sum up my findings in this article in order to simplify the implementation process for others.

Below one can see the mainboard with the mellanox interface. 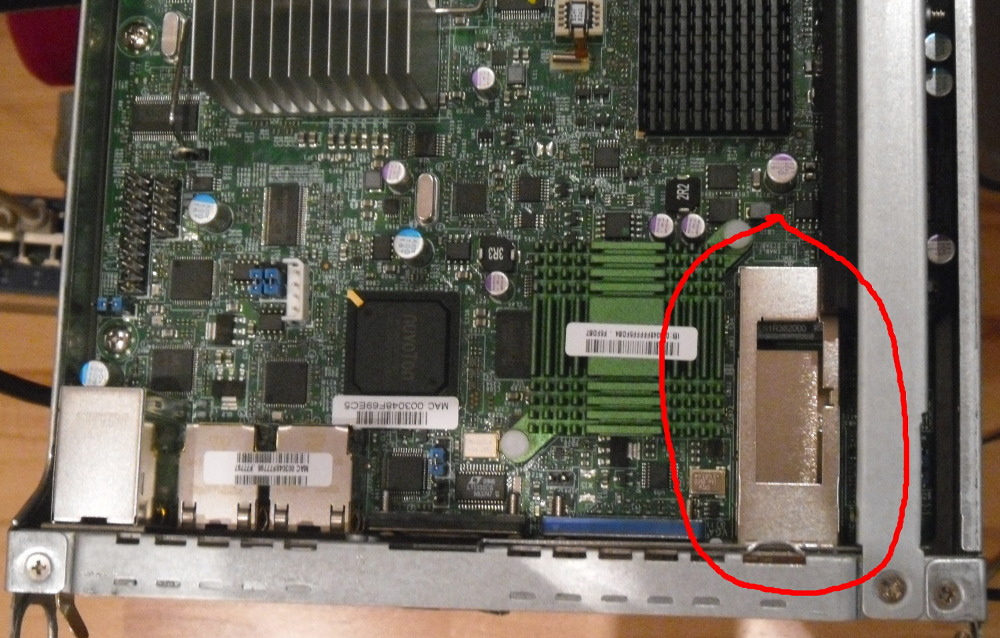 The first task was to find appropriate cables for this interface. After some digging around, It became clear that this interface needs some kind of transceiver mounted at the end of the cable which transforms the data for the media (either for copper wires or for a fiber signal). The standard used here is called “QSFP” and is available directly from Supermicro for an acceptable price. The cable looks like the following:

Now that the hardware was sorted out, the next step was to install the networking interface on Debian Linux. Fortunately, there is an Internet page that describes all necessecary steps: https://pkg-ofed.alioth.debian.org/howto/infiniband-howto.html. Following this guide, I installed the following packages from Debian wheezy instead of rebuilding them from source:

So a simple “apt-get install ibutils infiniband-diags mstflint” provides me with some interesting tools. In order to be able to use these tools, some kernel modules have to be loaded manually, which is done by adding the following to /etc/modules:

After loading the required modules on both nodes, the tool “ibstat” reported the following:

Well, that looked nice, unplugging the cable led to another Status: “Physical state: Polling”, so that seemed that the hardware was working. The above guide told me that I needed to use a so-called “subnet manager” in order to get the connection up and running – especially when directly connecting two nodes without a switch, however this is needed on one of the two nodes only. It seems that all that has to be done is to install the package “opensm” on one of the nodes via “apt-get opensm”.The link could then be checked with “ibstat” and reported “Active”, which sounded good, too. Moreover, “ibhosts” looked good, too:

Due to loading the module “ib_ipoib”, I now had a network interface:

The rest was simple – do a simple ifconfig on both machines:

So, the link was up and running!

Of course, the next interesting thing would be to test the performance of the link! The idea was to simply use FTP an transfer some huge file:

Hmmm, so let’s investigate this further with iperf:

Well, that looks way better, although we are still at roughly 25% of the possible network link. The reason for the slow FTP link may either be the inefficient protocol for the link or in buffering / reading / writing to the underlying harddrive.

The following page has some interesting findings on Infiniband performance on Linux:
https://techs.enovance.com/6285/a-quick-tour-of-infiniband

A good start for optimizing performance would be to download the latest driver, update firmware and stuff like that – but I’ll keep it as it is, a 10GBit-Link is basically all I was hoping for. So all in all setup was not too complicated, all needed tools were provided within the Debian distribution, so yes, Infiniband is a good alternative to 10GBit Ethernet!

In case one uses a switch which does not provide a subnet manager, one needs to use “opensm” as described above. One needs to start opensm on one node, however, if this node goes down, the subnet manager is absent. Therefore it makes sense to start opensm on every node. However, multiple instances of opensm will conflict unless the priority of the opensm daemon is correctly set. This is done as follows (for Linux Debian):

Now the configuration file can be edited, whereas the parameter “sm_priority” has to be set accordingly on each machine.